If you watched the Apple event where they released new Macs and iPad Pros they also had a section showing the critically acclaimed role playing game Divinity: Original Sin 2. It turns out the game is on its way to the Mac and not in a small way. This will not be a poorly and sloppy port, It will take advantage of many Apple technologies such as making it a 64-bit, Metal native game. 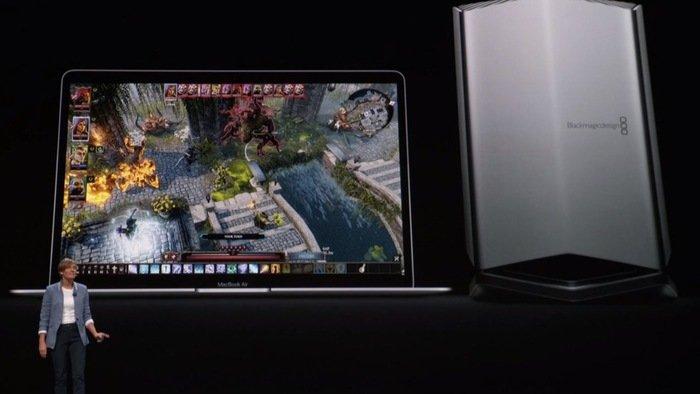 Divinity: Original Sin 2 have sold over 2 million copies. Its one of the most highly rated role playing games and could easily be the best RPG on the Mac. Apples Metal Team is working with the developer to bring this game to the Mac. Planned release is Q1 2019.

The game will support iCloud backups, but not only that you will be able to cross-play between Windows and macOS.

You should check out a game called Torchlight. It’s an action RPG game developed by people who previously have worked on Diablo, Diablo II, Mythos etc. The music is composed by the original author that made the music for Diablo.

Somewhat cartoonish graphics but it works, and the game isn’t so demanding for your computer. You don’t need the most high-end gaming rig to play this game. I have played the game and it is pretty nice. You can download it from the Steam client.

Torchlight 2 is also out.

Eschalon is an old-school style fantasy RPG. The game-play perspective is in third person. You guide your character around towns and dungeons. Fighting monsters and picking up treasures while all other elements of a good old RPG are there. Many reviewers give this game high ratings. This is not an old game, it is just developed in that particular style.


Update 27 march 2017: StarCraft Remastered Coming to a Mac near You

Starcraft Mac OS version was released in 1999, almost exactly a year after the Windows release. It is one of the best selling games for the PC. in 2007 it had sold in over 9 million copies worldwide. The game was released for Windows in 1998 and  the Mac (PowerPC) version following one year later.

Unfortunately Blizzard never bothered to update Starcraft so it works on modern Macs. That is why it is necessary to use virtualisation software such as VMWare Fusion or Parallels. With that said, Starcraft 1 is not power hungry, so it should work fine virtualised on most modern macs. Just make sure you have enough RAM. 8GB+ is preferred. Another option is to install bootcamp and make a small Windows partition, but then you have to reboot.

With all this said: It looks like blizzard have changed directions now and have an intent of making HD remakes of their older games and Classic Starcraft is obviously one of them.

At least according to a job listing from Blizzard (Quote):

Compelling stories. Intense multiplayer. Endless replayability. Qualities that made StarCraft, Warcraft III, and Diablo II the titans of their day. Evolving operating systems, hardware, and online services have made them more difficult to be experienced by their loyal followers or reaching a new generation.

We’re restoring them to glory, and we need your engineering talents, your passion, and your ability to get tough jobs done.

Starcraft is a RTS game which stands for Real Time Strategy. The game is set in a sci-fi world somewhere around the 26th century where the Terrans, Zerg and Protoss struggle for dominance.

Many known journalists have said it is one of the best and important video game of all time. In South Korea the game is extremely popular where pro gamers and teams engage in battles with each other, earn sponsorships and compete in tournaments broadcasted on TV. Now Starcraft 2 is taking over this role.

It is easy to say what makes it so addictive, the game play! in the beginning there was problems, like balance between different races, as time progressed Blizzard released new patches along the way. By doing this they also improved the game play, adjusted the balance and perfected the game as much as possible. The latest patch when this article was written (1.161) sometime in 2009, that tells us how dedicated Blizzard is to its ten year old game.

No gamer should have missed this game, but if you have. Grab your copy today and experience a game like no other.

You can digitally download your copy directly from Blizzard: Starcraft Mac: Blizzards Webshop

I got a question not so long ago from a reader in Russia. He wanted to play this classic game on his MacBook Air and stumbled across some problems. Here is the question from the reader and my answer:

QUESTION: I’ve recently bought a MacBook Air (mid 2011) which ships with Lion. I thought it would be cool to play one of my favorite classic games, StarCraft.

As it turns out, StarCraft Mac only exists in a PowerPC version, and Lion removes Rosetta and thus PowerPC apps support.

I’ve tried to launch a Windows version of StarCraft with Crossover Games, but it runs painfully slow when installed with default settings. The Crossover StarCraft recipe (which enables OpenGL rendering), on the other hand, leaves me with a screen full of graphic noise.

Do you by any chance have any experience with StarCraft on Lion? Can you suggest something apart from installing Windows via Bootcamp (I’m somewhat reluctant to have a dual-boot system just for Star- Craft)? Is VMware going to run StarCraft well?

ANSWER: Good question! I happen to be a StarCraft fan myself and played the original version a lot a few years after it came out. Not pro gaming though but still. Yes, I know that OS X Lion makes it hard to play this game and Blizzard have told us that they wont make it playable for Intel based Macs and its a shame.

Personally I would use a solution you suggest. Vmware or Parallels leaning against Parallels because it gets higher scores in game benchmarks. I have used it myself and it works alright. I haven’t tried it with StarCraft though but it should work just fine. Starcraft doesn’t need 3D acceleration but you can actually run some 3D games with Parallels too. The drawback is that you need to offer a few GB for the Windows installation but you wont have to reboot.

Go for Parallels, it will work. They have a trial version you can download and try before buying it.